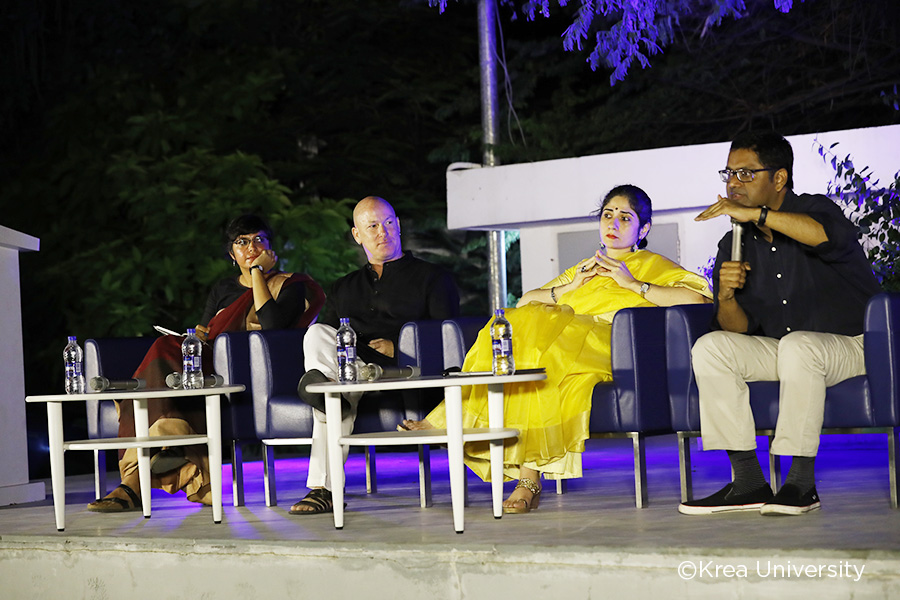 VENI (which stands for Visualise Explore Nurture Interweave) will be a platform to stage discussions, dialogue and debate relevant to academia, industry and community, aimed towards sustainable impactful solutions for the future.

In her address on ‘

“Students, Freedom and the Constitution,” Arundhati Katju, who litigated the Section 377 case at the Supreme Court and the Delhi High Court, said that people can have multiple identities but everyone must be given full and equal citizenship rights. “The future of the Constitution is in the hands of India’s youth, who constitute 65% of the population.”

Reuben Abraham, CEO of IDFC Institute, a policy think tank, in his talk on “India Lives in Her Cities,” called into question “rural” and “urban” definitional categories.

“We think that we must take jobs to our people, but it is better to take people to jobs, and the jobs are available more in cities. If you take Maharastra, its GDP is about USD 500 billion but its capital Mumbai alone accounts for more than half of its GDP. New York alone is a USD 1.5 trillion economy. Tokyo’s economy is bigger than countries like Canada, Turkey, Iran. Around 70% of the world’s GDP comes just from 40 urban centres,” he pointed out.

Taking part in the interactive session, Jacob Boehme, an aboriginal artist, and activist from South Australia, spoke about “Arts and Activism in the 21st Century. “He said that the voice of aboriginals in mainstream discussions on social issues is still feeble and that puts them in a disadvantageous position.”

The event was attended by students, academia and members from the industry.

Dr Akhila Ramnarayan, Divisional Chair of Literature and Arts at Krea and curator of programming for Krea’s Chennai venue, articulated the vision of VENI, a meeting place for researchers, students, educators, practitioners, and industry professionals in which diverse strands of thinking interweave to generate impactful solutions and action. She shared the upcoming public events calendar of VENI, including talks, workshops, panels, film screenings, a book club, and conversation sessions.

The launch of VENI – The Ideas Place is a key initiative by Krea central to our interwoven learning approach, providing Krea faculty and students a means by which to interface with Chennai’s diverse constituencies”, she said.

Explaining the concept of interwoven learning at Krea, Dr. Sunder Ramaswamy, ViceChancellor, Krea University, said, “it is an approach that weaves together creativity and action, arts and sciences, theory and practice, Eastern and Western perspectives as also the learnings of the past with the readiness for the future.

“At Krea University, interwoven learning is beyond an academic concept. The theories are strongly internalised by immersive learning experiences of real-world projects. We bring together the arts with the sciences, we believe that even if you want to be a poet, you need to learn data science. Likewise, if you want to be a computer scientist, you still need to understand humanities from the point of view of aesthetics and art, and events like these give our students that exposure to this thought process” he said.

My Journey to Krea

My journey to Krea

Reflections from the Field

An interview with Sharon Buteau