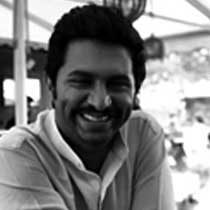 Aashique Ahmed Iqbal is a historian of South Asia. His research focuses on the impact of aviation on the decolonisation of South Asia. Put simply, it is a study of the role of the aeroplane in bringing modern India into existence. Aviation played a small but crucial role in transforming the Indian state from colony to republic. For both colonial and post-colonial South Asian regimes, the aeroplane would serve not only as a means to project sovereignty but also only as the pre-eminent marker of modernity. Aashique’s doctoral thesis, which is in the process of being prepared for publication, is the first major academic history of aviation. The hybrid nature of the project combines insights from a number of intersecting fields including histories of war, technology, state-making, law, diplomacy and business.

Aashique hails from Ooty and took his B.A. in History at Loyola College Chennai. He received his M.A. and MPhil in Modern History at Jawaharlal Nehru University, New Delhi and also holds a DPhil in History from the University of Oxford. He has received multiple scholarships including the Felix scholarship, the Royal Historical Society Marshall Fellowship, and the Maulana Azad National Fellowship

Aashique is an Associate Member of the Higher Education Academy of the United Kingdom. He has previously designed and taught courses at the University of Oxford and Shiv Nadar University. His teaching approach emphasises critical engagement with primary and secondary sources.

In addition to his teaching and research, he has been responsible for organising a major international workshop to mark the seventieth anniversary of Indian independence at the Institute for Historical Research, London. He is also keenly interested in making history accessible to the public and has engaged in a number of outreach activities including writing historical blogs and setting questions for the BBC Urdu quiz.