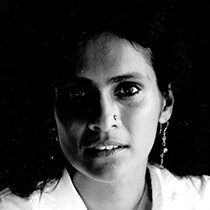 Dr Akhila Ramnarayan is a writer, independent scholar, theatre actor, and trained Carnatic vocalist with a Ph.D., in postcolonial studies from The Ohio State University, Columbus, Ohio, USA (2006).  She has worked as Learning and Development Manager at Pramati Technologies, Chennai (2013-2018), and taught at the University of Dayton, Ohio (2006-2011) and Asian College of Journalism, Chennai (2011-2014).

Since 2007, Ramnarayan has toured with and acted in JustUs Repertory’s internationally recognised plays When Things Fall Apart, Night’s End, Dark Horse Water Lilies, Land of the Free, Subverse, Mathemagician, and One Day in Ashadha. She has scripted, acted in, and helped produce Sahrdaya Foundation’s Don Quixote, penning the first ever adaptation of the Spanish literary classic in Bharatanatyam and Carnatic music idioms, which successfully completed a fifteen-city US tour in 2015.