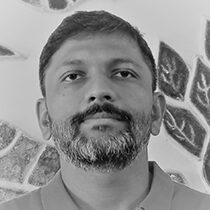 Anand Sahasaranaman, faculty of Mathematics at Krea University, works at the intersection of mathematics and the social sciences. His research is focused on exploring socioeconomic processes through the lens of complexity science and computational models. He is also a Visiting Scientist at the Centre for Complexity Science at Imperial College London and Research Adviser at Dvara Research.

He obtained his Ph.D., in Mathematics from Imperial College London, where he was a Schrödinger Scholar, for research on processes such as segregation and economic decline as complex systems. This has segued into explorations of migration and a cemented a broader interest in the science of cities. Anand was a founding member of the Dvara Trust in 2008 and for over five years from 2010, led the work of Dvara Research. His research agenda there revolved around questions of financial systems design, customer protection frameworks, rural household portfolios, and public finance for small cities. Prior to this, Anand worked at IFMR Capital (now known as Northern Arc) on financial access for institutions impacting low income households. Between 2003 and 2007, he worked on the debt capital market desks at the investment firm Broadstreet Group and hedge fund Pali Capital, modelling structured debt instruments. He started out as a programmer at Tata Infotech in 1999.

Anand trained as an electronics engineer at PSG Tech and has an MBA in Finance from Carnegie Mellon.