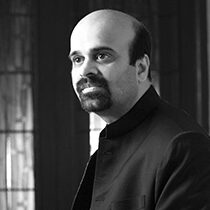 Anil Srinivasan is an accomplished classical pianist, the first to be awarded the coveted Sangeet Natak Akademi youth award in 2010 for creative and experimental music, India’s national honour for musicians under 35. Anil’s various collaborative works – with several of India’s top artistes have come in for critical acclaim. Collaborators include U Srinivas, Ravikiran, Aruna Sairam, Unnikrishnan, Rakesh Chaurasia, Lalgudi Krishnan, Gaurav Mazumdar, Jayanthi Kumaresh and others. Anil is best known for his association with Sikkil Gurucharan, with whom he has produced ten highly popular albums. Anil has composed extensively for dance and theatre internationally working as far afield as Korea, Australia and the United States. Anil has been a TED speaker, chaired conferences on music in venues as diverse as Liverpool Hope University and the University of Mumbai and has represented India across multiple forums involving arts education.

With an M.Phil from Columbia Business School and an MBA from the University of Southern California, Anil is also a popular speaker and a columnist for a wide variety of publications including The Hindu and The Indian Express. Previously, he has served as adjunct faculty at Mumbai’s SP Jain Institute of Management and Research.

Importantly, Anil is the founder of the “Rhapsody” music education initiative. This hugely successful programme takes the classic arts to schools, through a structured, systematic syllabi delivered through physical classroom learning and online support. Today, nearly 200,000 children across South India are part of Rhapsody. More specifically, it pioneers the idea of STEM learning using music and arts-based interventions.

In addition, Anil serves as a trustee of the NalandaWay Foundation, reaching children in difficult situations.