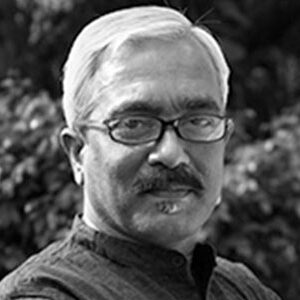 Bishnu N. Mohapatra is a political scientist and poet, an educator and a commentator on society, governance, policy and culture. Bishnu has taught politics for more than twenty-five years at University of Delhi, Jawaharlal Nehru University and AzimPremji University. He has held visiting appointments at Maison des Sciences de l’Homme, Paris, National University of Singapore, University of Kyoto, Japan, and National Institute of Advanced Studies, Bangalore. He has lectured at several universities in Asia, Africa, Europe and North America. From 2002 to 2010, he headed the governance portfolio of the Ford Foundation’s South Asia office, New Delhi.

Bishnu has published in the areas of identity politics, democracy, minority rights, urban politics, civil society and social capital. He is currently researching on cities and their multiple imaginings in history. He is also in the process of initiating a collective research project that seeks to understand the conceptual universe embedded in India’s Bhasa literature.