Mr. Chintalapati Srinivasa Raju, widely known as Srini Raju, is an Indian Entrepreneur, and Private Equity Investor. Srini Raju was the CEO of Dun & Bradstreet Satyam Software (later renamed as Cognizant) established in 1994, which focused on implementing large-scale IT projects for Dun & Bradstreet businesses. Srini later became the Co-founder and Chairman of Peepul Capital, a Private Equity (PE) firm based out of Hyderabad and Chennai. Besides funding and mentoring next generation entrepreneurs, he plays an active role in building educational institutions of higher learning.

He has been a Member of the Executive Board of the Indian School of Business. Srini Raju pledged to donate Rs.35 crores towards developing a Research Centre in the areas of Information Technology and Networked Economy. He is also a member of the Governing Board and Governing Council, Founding Member and a Donor of IIIT, Hyderabad.

Mr. Raju received a Master’s Degree in Civil and Environmental Engineering and Master of Science Degree from Utah State University and a Bachelor’s of Science in Civil Engineering, with Honors, from R.E.C., Kurukshetra. 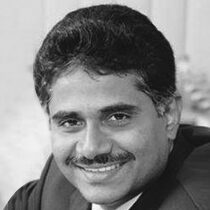