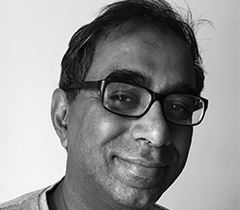 Associate Professor of History of Science

An incoming Associate Professor at Krea University, John Mathew has just concluded a four-year stint in the same capacity at the Indian Institute of Science Education and Research (IISER), Pune, in the Humanities and Social Sciences. He has taught previously at Harvard University, Cambridge, Massachusetts; the University of Massachusetts, Boston, Massachusetts; and Duke University,Durham, North Carolina. With Bachelor’s, Master’s and M. Phil. degrees in Zoology from the Madras Christian College, Chennai (Madras), Tamil Nadu, he holds an additional Master’s (A. M.) in Medical Anthropology from Harvard University, and two doctorates, one in Ecological Sciences from Old Dominion University, Norfolk, Virginia, and the other in the History of Science from Harvard University. His instructional experience includes anthropology, biology,geology, history and the history of science. At IISER, his courses comprised a core offering for the entire second year class (of approximately 200 students), ‘An Introduction to the History of Medicine, Science and Technology’, and electives for the third and fourth year classes, ‘Environmental History’ and ‘Science, History and Theatre’, apart from individual semester long projects, including ‘The Evolution of Altruism’ and ‘The Reception of Darwinism in India’.

John is in the process of concluding a book length manuscript, ‘To Fashion a Fauna for British India’, due for submission to Oxford University Press. He is also actively researching the plague and influenza epidemics in India in the 1890s and 1918-19 respectively.

John’s interests are fundamentally cross-disciplinary. He retains a deep interest in theatre and music, both of which he brought into conversation with his own research, in the writing and performance of a musical at IISER Pune titled ‘The Sun Was White, The Moon Disobedient’, with the students of the institute in the main. He also founded and directed the institute’s choir.