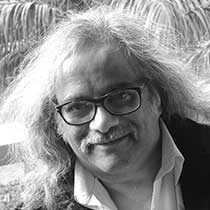 K. Sridhar has been working over the last three decades in Theoretical High Energy Physics. He has published extensively in the Physical Review Letters, Physics Letters B, Physical Review D, Journal of High Energy Physics and other reputed journals, exploring all the dominant (and some not-so-dominant) paradigms of research in this field. He has published a book Particle Physics of Brane Worlds and Extra Dimensions with Cambridge University Press as part of their renowned series Cambridge Monographs on Mathematical Physics. His research collaborations are with physicists in centres like CERN, Geneva and DAMTP, Cambridge, among others and he has been the Principal Investigator or Senior Collaborator on several research projects. He has held visiting positions in a number of institutions around the world and has been active in organising conferences and scientific meetings.

Sridhar believes his practice of physics cannot be done in isolation and has been working systematically on consolidating his interests in philosophy, literature and culture. He has been writing papers and giving talks and courses on aspects of philosophy especially those related to the science and knowledge questions. He published a work of literary fiction entitled Twice Written and is working on his second literary project. He is also engaged with the world of contemporary visual arts in India and regularly writes reviews of art shows and catalogue essays.

He is seriously committed to the questions of pedagogy and inter-disciplinarity. He contributed to a major project on Integrated Education which sought to make transformative changes in pedagogy and edited a volume entitled Breaking the Silos: Integrated Science Education in India.

Sridhar also variously describes himself as a crossword buff, a lover of music – especially of rock and blues, a Hindi movie trivia follower, a versifier, a little-history raconteur of Bombay: a city he is in love with, grown up in and lived in with his wife and daughter. He will be visiting Krea University on leave from the Tata Institute of Fundamental Research.