Ms. Kiran Mazumdar-Shaw is the Chairman and Managing Director of Biocon Limited, a biotechnology company based in Bengaluru, India. She was awarded the Othmer Gold Medal, for outstanding contributions to the progress of science and chemistry. She is on the Financial Times’ top 50 Women in Business list. She was listed as the 85th most powerful woman in the world by Forbes. She was voted Global Indian of the year by Pharma Leaders Magazine in 2012.

Her work in the biotechnology sector has earned her numerous national awards, including the Padma Shri (1989) and the Padma Bhushan (2005) from the Government of India. She was also awarded the Nikkei Asia Prize (2009) for regional growth, the ‘Veuve Clicquot Initiative for Economic Development for Asia’ Award (2007), Ernst & Young Entrepreneur of the Year Award for Life Sciences & Healthcare (2002), and ‘Technology Pioneer’ recognition by the World Economic Forum (2002). At the Pharma Leaders’ Pharmaceutical Leadership Summit, she was named ‘Global Indian Woman of the Year’ (2012).

At Biocon, she started a CSR wing, which focuses on the areas of health, education and infrastructure. Her “The Mazumdar-Shaw Medical Foundation” supports Translational Research and the Mazumdar-Shaw Cancer outreach program. She is also the Chairperson of IIM, Bangalore.

She studied Biology and Zoology, graduating from Bangalore University with a Bachelor’s Degree in Zoology and has a Master Brewer certification from Federation University. 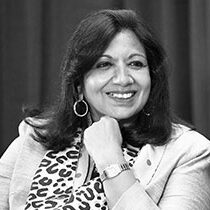