Dr. Bhargava is a Canadian-American mathematician of Indian origin. He is the R. Brandon Fradd Professor of Mathematics at Princeton University, the Stieltjes Professor of Number Theory at Leiden University, and also holds adjunct professorships at the Tata Institute of Fundamental Research, the Indian Institute of Technology, Bombay, and the University of Hyderabad.

He is known primarily for his contributions to number theory. In 2014, he was awarded the Fields Medal, which is the highest honour in the field of Mathematics.

He obtained his B.A. from Harvard University in 1996. Bhargava went on to receive his doctorate from Princeton in 2001, supervised by Andrew Wiles and funded by a Hertz Fellowship. He has made several important contributions to mathematics over his career and is especially known for his 14 new Gauss-style composition laws, derived from the works of the German mathematical genius Carl Friedrich Gauss. 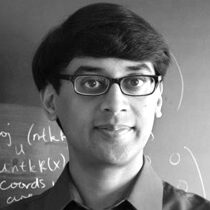