Kalam was an ICSSR Doctoral Fellow in the Department of Sociology, Delhi School of Economics. His Ph.D. in Anthropology is from the University of Madras where he taught for 33 years. He was Professor and Head of the Department of Anthropology at the University of Madras for six years, as also the Chairperson (Dean) School of Social Sciences, and Adjunct Professor at the Centre for Ocean and Coastal Studies.

Kalam was Rockefeller Resident Fellow at Duke University, Human Rights Fellow at Harvard University, and Commonwealth Academic Staff Fellow at the London School of Economics and Political Science. Also, he was Visiting Professor at Universities in France, as also at the Indian Institute of Advanced Study, Shimla, and Maulana Azad National Urdu University, Hyderabad.

Kalam was Professor of Eminence at Tezpur Central University, Assam, for about four years where he was founder Head of Department of Social Work. Subsequently, he was at Loyola Institute of Business Administration as Professor of Applied Social Sciences (Adjunct Faculty).

Kalam has undertaken anthropological fieldwork among South Asians in England, the USA and France. He has participated in post-Tsunami rehabilitation and reconstruction work in Thailand, Sri Lanka and the Andaman and Nicobar islands.

Kalam has extensive administrative experience; he was on the Board of Management of Tezpur Central University, and is currently on the Planning Board of Pondicherry Central University. He was Governing Council Member of the Indian Council of Social Science Research. He also served as a Member of the Expert Group on Diversity Index, Ministry of Minority Affairs, Government of India.

Kalam continues to publish extensively not just academically but also in newspapers and periodicals. He wrote a column during mid-1990s for The Hindu Business Line.

Kalam has been a keen sportsman. He has represented his University in Football and Cricket, and has played Hockey at the state level. He has also been a long-distance runner and won prizes at the district and divisional level. He is a qualified cricket umpire and officiated in matches conducted by the Tamil Nadu Cricket Association.

Kalam has participated in the BBC TV Mastermind Quiz competition. He has won a UNESCO photography award. 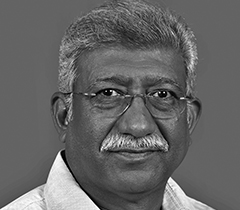