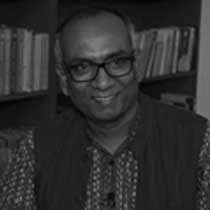 Prithvi Datta Chandra Shobhi is a social historian, literary critic and political commentator. He studied history and literature at Jawaharlal Nehru University, New Delhi, and at the University of Chicago, from where he obtained a Ph.D. He was also a postdoctoral fellow at the University of Chicago, visiting fellow at the Centre for the Study of Developing Societies (CSDS), Delhi, and was on the faculty of Humanities at the San Francisco State University. Most recently, Prithvi taught history at Karnataka State Open University, Mysore. He has also worked with the American Institute of Indian Studies and Bangalore Central University.

Prithvi’s research interests include the history of dissent, Indian intellectual and religious imaginations, literature and political theory. He has published widely on these themes, both in scholarly forums and popular media. Prithvi edited the works of A.K. Ramanujan and D.R. Nagaraj, which resulted in the publication of three books: Poetry and Prose from Kannada (OUP, 2005); The Flaming Feet and Other Essays on Dalit Movement in India (Permanent Black, 2010); and Listening to the Loom: Essays on Literature, Politics and Violence (Permanent Black, 2012) . At present, he is completing a manuscript entitled Hindu or Not: Anxieties of the Self and the Politics of History in the Making of Virashaiva-Lingayats, which explores the relationship between Vachana poetry and Virashaiva-Lingayat community. He is also translating a volume of Kannada short stories for Aleph Publishers, New Delhi. Prithvi has been a frequent contributor to the Indian Express, Outlook magazine and now writes regularly for ThePrint.in. He writes extensively in Kannada and is a well known Kannada columnist.