Dr. Raghuram Rajan is the Katherine Dusak Miller Distinguished Service Professor of Finance at Chicago Booth. He was the 23rd Governor of the Reserve Bank of India (Sept. 2013 – Sept. 2016). Between 2003 and 2006, Dr. Rajan was the Chief Economist and Director of Research at the International Monetary Fund. He was the President of the American Finance Association in 2011 and is a member of the American Academy of Arts and Sciences.

In 2003, Dr. Rajan won the inaugural Fischer Black Prize awarded by the American Finance Association for contributions to the theory and practice of finance by an economist under age 40. In February 2010, NASSCOM named him a Global Indian at its 7th Annual Global Leadership Awards. In 2010, his book “Fault Lines: How Hidden Fractures Still Threaten the World Economy” was awarded the Financial Times and McKinsey Business Book of the Year Award. In 2014, he was conferred the Best Central Bank Governor award by Euromoney Magazine and Central Banking financial journal. 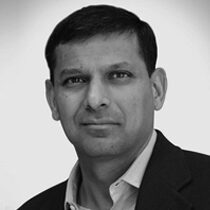