Dr Rangashri Kishore was Founding Director of Ashoka University Library prior to joining as Dean of Library Services at Krea University. She is a Librarian by profession but she is also a mental health worker by avocation. She has co-founded three half-way homes in India. She has received several awards during her thirty-five years of work in the field of Library Services and Mental Health namely 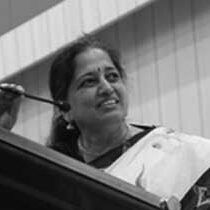