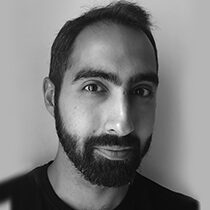 Rishi Vyas is a mathematician whose research interests lie in algebra, with a specific focus on ring theory, homological algebra, and group theory. He is also interested in science policy and the ethical aspects of science, technology, and mathematics.

After earning an undergraduate honours degree in mathematics from St. Stephen’s College, Rishi proceeded to the University of Cambridge for graduate and doctoral studies. At Cambridge, he was supported by fellowships from the Inlaks Foundation and the Cambridge Commonwealth Trust. He wrote his thesis on the homological aspects of noncommutative ring theory.

For his postdoctoral research at the Ben-Gurion University of the Negev, Rishi worked to further understand the homological theory of noncommutative rings; he was supported by a PBC fellowship from the Israel Council for Higher Education. Rishi has also undertaken research in group theory, with a focus on combinatorial group theory and the interplay between group theory, logic, and computability.

Apart from his research and pedagogical interests in mathematics, Rishi has an interest in science policy, and particularly in the ethical aspects of mathematics, science, and technology. In particular, he is very interested in examining the role ethics should play in an undergraduate curriculum.