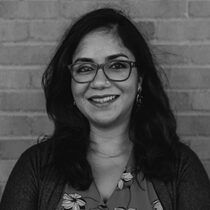 Dr. Shyama Rajendran received her Ph.D., in English Literature from The George Washington University in 2017. Her research is centred on late medieval literature (focusing on authors such as Geoffrey Chaucer, John Gower, and John Mandeville), and explores varied forms of cultural and linguistic belonging and how demarcations of difference are culturally reproduced.

She brings together medieval literature, sociolinguistics, critical race theory, disability theory, and gender studies in order to develop productive conversations that exist at the intersections of these fields. For example, her article titled “E(race)ing the Future: Imagined Medieval Reproductive Possibilities and the Monstrosity of Power” (forthcoming in 2019), argues that ideas of monstrosity in disability studies and critical race theory are poised to intersect with each other, as both offer models of alterity that productively challenge implicit Eurocentric social and religious norms. The article compares two late medieval romances, the King of Tars and The Man of Law’s Tale and focuses on fantasies of reproductive futurity as the link between monstrosity, race, and disability, and the need to attend to the metalanguage of difference.

Her research also situates English multilingual authors within the context of the global middle ages and draws on methodologies from scholars working in non-European contexts, such as the medieval Mediterranean, bridging the conversation between the English and European Middle Ages with the global Middle Ages