Sunder Ramaswamy is currently the Vice Chancellor of Krea University, – a new innovative approach to interwoven learning, designed specifically to help students prepare for impactful leadership in the dynamic, uncertain, and complex world of the 21st century. He is working in collaboration with other academics, industrialists, and philanthropists at the campus coming up in Sri City, near Chennai, India. Sunder Ramaswamy is on leave from Middlebury College, one of the top nationally-ranked liberal arts colleges in the U.S, where he is a Distinguished College Professor of International Economics.

From 2015 – 2017, he was the Officiating Director and Visiting Distinguished Professor at the Madras School of Economics (MSE, Chennai, India), one of India’s premier higher education institutes for economics. At MSE, he also served as the Member Secretary for the Centre of Excellence in Environmental Economics, funded by the National Ministry of Environment, Forests and Climate Change.

From January 1, 2009, through January 31, 2015, he served as the President and Frederick C. Dirks Professor of International Economics at the Monterey Institute of International Studies, a Graduate School of Middlebury College, in Monterey, California, USA. At the Monterey Institute of International Studies (MIIS), he oversaw an ambitious academic reorganization, a successful completion of the integration of MIIS with Middlebury College (June 30, 2010), handover of the reaccreditation process from WASC to NEASC (including a successful 10-year combined NEASC reaccreditation in 2011-12), accelerated fundraising, scaling up the endowment, budgets in the black for 8 straight years, and increased Institutional visibility. During his tenure, the Institute successfully launched new graduate degree programs in nonproliferation and terrorism studies (NPTS), international education management (IEM), international trade and economic diplomacy (ITED), as well as the creation of three new research centers (the Center for the Blue Economy, the Center for Conflict Studies, and the Center for Social Impact Learning), a Cyber Security initiative, and a number of other innovative programs. He also re-energized the alumni outreach programs, resurrected the alumni Reunion program, created new awards for outstanding alumni, and promoted active community engagement with the creation of the eMIISsaries group of ambassadors. The Institute also completed an ambitious facilities’ Master Plan to develop the Campus over the next decade.

In 2011, the Monterey County Business Council (California) awarded him with their 2011 Economic Vitality Award in the “Education” category. In 2014, the Monterey County Weekly, on the occasion of its 25th anniversary, recognized him as “one of the 25 local game-changing leaders in Monterey, California”. In 2014, he, along with his wife, Varna, was honoured by the International School of Monterey (California) on National Philanthropy Day. That same year, an anonymous donor gave a 7-figure gift to endow the “Sunder and Varna Ramaswamy Scholarship Fund” at the Middlebury Institute of International Studies at Monterey. In 2019, the Indian Economic Development & Research Association (IEDRA) conferred him with an “Outstanding Achievement Award for Educational Excellence” and in the same year, Careers 360, in marking its 10th Anniversary Edition featured him as one of the “top Academic Changemakers in India”.

Over the past 29 years he has held visiting positions at the Madras School of Economics (India, including a position as the Director of MSE from 2003-2005), Vanderbilt University (USA), Institute of Financial Management and Research (India), Purdue University (USA), and the World Bank (USA). His principal fields of specialization are Development Economics, International Economics, Issues in Applied Microeconomics, and Quantitative Methods. He has been involved with World Bank projects on various aspects of economic reforms in India. In the past, he has also been associated with USAID and INTSORMIL projects on agricultural development in Sub-Saharan Africa. His academic work has been supported by grants from the S.W. Davis Foundation, Ford Foundation, and the Kellogg Foundation. He has also been a consultant to UNCTAD, UNIDO, and United Nations University on specific development economics projects.

His research interests are in the areas of development economics (focus on sustainable development, technological change, and financial sector reforms), international economics (trade liberalization, trade and development issues), and applied microeconomics. He has contributed many chapters in various books and articles either published or forthcoming in journals such as Agricultural Economics, Agricultural Systems, Applied Economics, Comparative Economic Studies, Economic Development and Cultural Change, Economics Letters, Environment, Food and Nutrition Bulletin, and Outlook on Agriculture.

His co-edited books include Development and Democracy: New Perspectives on an Old Debate, with Jeffrey Cason (University Press of New England, 2003) and Social Capital and Economic Development: Well-Being in Developing Countries, with Jonathan Isham and Thomas Kelly, (Edward Elgar Publishers, 2002). He was also one of the Series editors (with Michael Geisler and Neil Waters) of the Middlebury College Bicentennial Series on International Studies published by the University Press of New England (1999-2004). His other co-authored books include The Economics of Agricultural Technology in Semiarid Sub-Saharan Africa, with John H. Sanders and Barry I. Shapiro (Johns Hopkins University Press, 1996, 1997); and Economics: An Honors Companion, with Kailash Khandke, Jenifer Gamber and David Colander (MaxiPress, Richard D. Irwin Publishers, 1995). He is currently working on a manuscript on Indian economic reforms.

In 2002, he was appointed the Frederick C. Dirks Distinguished Professor of International Economics at Middlebury College (till 2015). At Middlebury, he also served as the Vice Provost of the Middlebury – Monterey Integration Task Force (2007-2008), Dean for Faculty Development and Research, (2007 – 2008); Acting Dean of the Faculty (2006-07), the Chair of the economics department for three terms (1996 – 2003). At Middlebury College, he was also elected to every major College-wide committee by his peers. 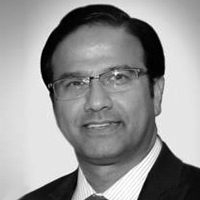