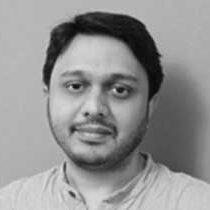 He has contributed to the development of formal proofs in mathematics and theoretical computer science in Isabelle/HOL, a proof assistant based on Higher Order Logic. Prathamesh has also undertaken research and continues to retain an interest in algorithmic and combinatorial aspects of knot theory, and in the interplay of geometric group theory, computability and logic.

Prathamesh did his undergraduate studies in Mathematics at St. Xavier’s College, Mumbai. Thereafter he pursued an Integrated Ph.D in Mathematics from the Indian Institute of Science, Bangalore. His doctoral thesis was titled ‘Mechanizing Knot Theory”. Subsequently, he spent two stimulating years as a Post-Doctoral Fellow in the Institute of Mathematical Sciences, Chennai. After a short stint as a Visiting Scientist at the Indian Statistical Institute, Prathamesh joined the computational logic group of the Institute für Informatik – Universität Innsbruck in Austria as a Post-Doctoral Researcher in the FWF-funded Fortissimo project.

His other interests include philosophy of science and social dimensions of science. He is particularly interested in the potential role of science and math education in dissemination of critical thinking and scientific temper. He grew up all around India, but retains a soft corner for the city of Chennai.