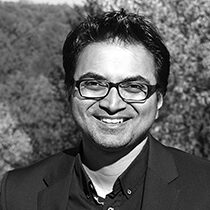 Kalyan Chakrabarti has research interests in the interface between biology and chemistry. He held researcher positions in the Max Planck Institute for Biophysical Chemistry (Göttingen, Germany), the National Cancer Institute (in the National Institute of Health, USA) and the Howard Hughes Medical Institute in the Brandeis University, USA.

His work primarily focuses on protein dynamics and he is the coordinator of an international collaboration to develop a comprehensive framework for investigating protein dynamics involving the Max Planck Institutes in Göttingen and Potsdam, FreieUniversität, Berlin in Germany, and the University of Louisville, USA.

He obtained his B.Sc. Chemistry (Hons.) degree from the Presidency University, Kolkata. He went on to receive his master’s and doctorate degrees from the Indian Institute of Science, in biophysics with specialisation in Nuclear Magnetic Resonance spectroscopy of proteins. He has several contributions in the area of functional role of protein dynamics. In 2016, he along with an international collaboration published one of the most comprehensive examples of conformational selection in protein-protein interaction.

Molecular recognition plays a central role in biology, and protein dynamics has been shown to be important in this process. Solution NMR has an arsenal of experimental techniques for recording dynamics of biomolecules in different timescales at atomic resolution. The focus of my research has been on the role of dynamics in the functioning of biomolecules, specifically, the role played by dynamics in protein-protein/ligand interactions. It is highly debated whether conformational changes happen before ligand binding to produce a binding-competent state (conformational selection) or are caused in response to ligand binding (induced fit). In case of the neuronal calcium sensor protein recoverin, which has a favorable rate of binding of ~ 30 s-1, we could show comprehensively that the binding follows a conformational selection mechanism (Chakrabarti et al 2016). The slow rate of binding allowed us to employ stopped-flow kinetics for direct measurement of rates. However, this investigation becomes more difficult in other systems as the rates in question become faster and beyond the detection limit of many biophysical techniques. Therefore, in case of the ubiquitin-conjugating system we had to resort to molecular dynamics simulation, along with NMR relaxation dispersion experiments, to show dynamic origin of allostery of binding to its partner protein, the ubiquitin-ligase (Chakrabarti et al 2017). Currently we are extending the investigation to the model protein ubiquitin, which involves development of both NMR methodology and computational algorithms for data clustering.