Mr. Anand Mahindra is the Chairman of the Mahindra Group, a Mumbai- based business conglomerate with a market capitalisation of US$19 billion. He is the co-founder of the Harvard Business School Association of India. An avid advocate of using ‘design for human happiness’, Anand is the Chairman, Governing Council, National Institute of Design and President, India Design Council.

He was included by Fortune Magazine among the ‘World’s 50 Greatest Leaders’ and featured in the magazine’s 2011 listing of Asia’s 25 most powerful business people. Anand was noted by Forbes (India) as their ‘Entrepreneur of the Year’ for 2013 and was also tagged as the face of Indian capitalism by The Economist. He was the World Economic Forum co-chairman in 2009.

In April 2014, Anand became a member of the board of U.S.–India Business Council (USIBC). He is the Chairman of the India Advisory Council at the Lincoln Center, New York. In January 2015, he was appointed on a four-year term as a Trustee of the Natural History Museum of London. He graduated in film making and architecture from Harvard University and earned an MBA from Harvard Business School.

Anand Mahindra donated $10 million to Harvard University for the Mahindra Humanities Centre. He is also the Chairman-for-life and member of the board of directors of Naandi Foundation, an Indian charitable trust that works towards the socio-economic development of India. 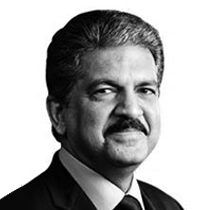