Subramanian Ramadorai has been an Advisor to the Prime Minster of India in the National Skill Development Council, carrying the rank of Cabinet Minister. Mr. Ramadorai served as CEO and MD of Tata Consultancy Services (TCS) from 1996 to 2009 & Vice – Chairman of Tata Consultancy Services till 6 October 2014. He transformed TCS into one of the world’s largest software and services companies.

He is also the Chairperson of the governing board of the Tata Institute of Social Sciences and Chairman of the Indian Institute of Information Technology, Guwahati. He is also on the board of directors of Hindustan Unilever Ltd. and Nicholas Piramal India Ltd.

Mr. Ramadorai holds a Bachelor’s Degree in Physics from Delhi University, a Bachelor of Engineering Degree in Electronics and Telecommunications from the Indian Institute of Science, Bangalore and a Master’s Degree in Computer Science from the University of California, Los Angeles. In 1993, Mr. Ramadorai attended the Sloan School of Management’s highly acclaimed Senior Executive Development Program.

He has received prestigious awards such as the Padma Bhushan from the Government of India, Commander of the Order of the British Empire (CBE) and CNBC Asia Pacific’s “Asia Business Leader of the Year”. 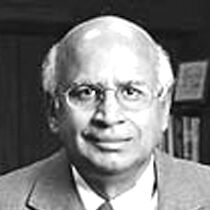